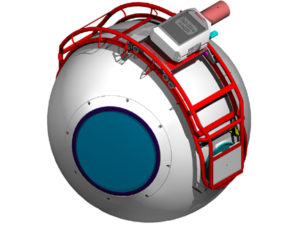 Doug worked with one of the principle founders of Wescam, the camera stabilization system used on a majority of action-adventure movies and huge number of car commercials. It is the large white ball attached to the front or side of a helicopter sometimes seen in the “special features” section that accompanies most DVD releases. Its purpose is to eliminate the inherent shake typical of all rotary-winged aircraft and give the camera operator a way to control it from inside the aircraft.

The Rainbow Imager was to be the next generation of these tools – enabling the aircraft to roll 360° and perform full High-G loops. The Rainbow Imager could also be mounted on a fixed wing aircraft like a B-25. It had 28 motors and it seemed that everything moved around inside of something else. It was the most challenging mechanical project Doug has worked on to date. He was responsible for 90% of the mechanical design after being given only basic functional requirements.